​General Election evening was a night filled with anticipation, excitement, and tears of joy.  I was at my usual post: commentating on the election’s results with Mike Buck on AM690/FM 94.3, a tradition that we’ve maintained for many years now.  Jared and I eventually made our way down to the west side of Oahu to visit a couple of our HLTA-endorsed candidates who are now newly-elected officials to the Hawai‘i State Legislature.

In the realm of endorsements, HLTA had a stellar year.  Our organization successfully endorsed 42 candidates in the 2018 State General Elections, 36 of whom were victorious in their respective races. 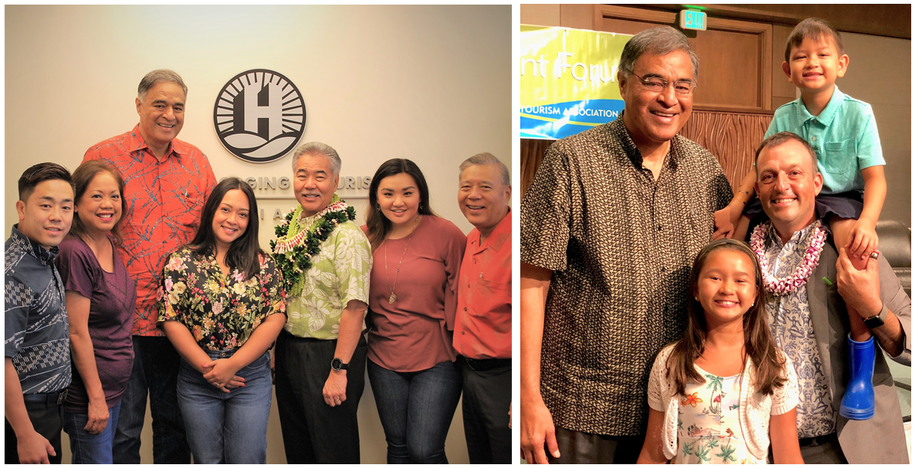 ​Hats off and congratulations to Governor David Ige and his running mate Lieutenant Governor-elect Josh Green for their triumph last night, as well as to newly elected Maui Mayor-elect Mike Victorino and Kaua‘i Mayor-elect Derek Kawakami.
In the Hawai‘i Island County Council, HLTA batted 100% in our endorsements as County Council candidate Rebecca Villegas (District 7) was victorious, joining the 5 endorsed candidates who won their seats in the Primary Elections.

Additionally, a big victory for the visitor industry came in the form of a County Charter Amendment. The Maui measure titled “Penalties” was approved in resounding fashion by Maui voters yesterday.  The result of this charter amendment will greatly increase the penalties on the operation of illegal short-term vacation rentals in Maui County.  The measure, which garnered 26,045 votes, will take the current $1,000 fine a person could be fined for operating an illegal TVR to up to $20,000, with a $10,000 fine for each day the illegal operation persists.  This is a huge victory for our industry in our mission of creating parity with the transient vacation rental market.  It truly underscores the theme that I have been advocating - this is not about the industry versus Airbnbs, but rather, the community against illegal TVRs.

Lastly, in the City & County of Honolulu, I would like to congratulate Council District 4 incumbent Councilmember Trevor Ozawa who won in a nail-biter against former State Representative Tommy Waters.  After factoring in the last-minute absentee ballots, post third-printout, Trevor inched ahead of his opponent, clinching his re-election to the Honolulu City Council.  Meanwhile Kelly Kitashima, who hails from the tourism industry, did well on her first attempt for public office by garnering 42% of the vote in Council District 8.

Although we do not endorse on the federal level, it is worth noting that former Outrigger executive, Ed Case, won his election to return to Congress.  We know that given Ed’s active involvement and experience in our industry, he will be a strong voice for tourism in the nation’s capital.

​HLTA’s involvement in the 2018 elections was unprecedented in our 71-year history, and I would like to take a moment to emphasize the important stance that we took, not only in conducting a comprehensive statewide endorsement process, but supporting candidates who will be leaders in our community and stout supporters of our visitor industry.  Two such candidates came out of Mililani and Ewa Beach. ​

​In Mililani, newcomer Val Okimoto won the District 36 seat over former State Representative Marilyn Lee by over 800 votes!  In an interview on election night, she credited the Hawai‘i Lodging & Tourism Association for being the only organization that endorsed her in her inaugural campaign.  Born on the island of Kaua‘i, the former special education teacher and highly active community leader is very familiar with the important role that tourism plays in our state’s economy.

In Ewa Beach, Kurt Fevella upset State Representative Matt Lopresti for the Senate District 19 seat which was vacated by former Senator Will Espero.  Kurt, a janitor by trade, is a fixture in the Ewa Beach community, serving as the President of the Ewa Beach Lions Club, and spearheading events such as park cleanups, the Ewa Beach Christmas Parade, and college football star Tua Tagavailoa’s Homecoming Ewa Parade.  HLTA was the first organization to endorse Kurt, who is now the only Republican Senator in the State of Hawai‘i - and the highest ranking official in the state’s GOP party.  He is very cognizant of the hundreds of his constituents from Ewa who are hospitality employees and promises to be supportive of HLTA’s efforts to strengthen our tourism industry.

As we close General Election 2018, I would like to applaud all the candidates throughout the state that endured the rigors of campaigning and offered our voters choices.  I would also like to commend those who took the time to go out and vote, exercising your right and responsibility as an American citizen.  Finally, I would like to send out our heartfelt congratulations to all the endorsed candidates of HLTA who will be taking office shortly.  We send our mahalo for your support of Hawai‘i’s hospitality industry and we look forward to working with you!