The Hawai'i Lodging & Tourism Association has taken on numerous responsibilities and initiatives over the years, never more so than during the COVID-19 pandemic. Below, you will find a cross-section of the various focuses that our association has taken on over the past several years in our pursuit of education, advocacy, and philanthropy.
Pandemic Response
Hotel Health and Safety Standards. HLTA was the first organization in the state to have its Health, Safety, and Security Standards approved by the Department of Health. The standards were developed by hotel general managers and lodging operators statewide, using research from the Centers for Disease Control and Prevention, World Health Organization, U.S. Environmental Protection Agency, Occupational Health and Safety Administration, American Hotel and Lodging Association, National Restaurant Association, and others. The standards are a baseline for hotels, suitable for operations of all types and sizes, and adaptable to national brand standards.

Hotels for Heroes. Hotels for Heroes was introduced a month into the pandemic to offer complimentary hotel rooms to individuals on the front lines of the pandemic. The project was a partnership of HLTA, Hawai‘i Tourism Authority, and Hawai‘i Visitors and Convention Bureau. Funded by state tourism money, Hotels for Heroes was made available through the Healthcare Association of Hawai‘i, Hawai‘i Medical Association, police and fire departments, state agencies with first-responder mandates, and emergency medical technicians. Thirty-five hotels signed up to participate initially and provided over one thousand room nights in the first two weeks alone.

​Outreach Campaigns. The HLTA launched several media projects to generate financial support for those affected by the pandemic, or to involve the community in communicating the seriousness of the situation. Among them was “Stay Home Now, Aloha Later,” which was broadcast on KHON and its sister stations on the mainland and featured recorded messages and performances from local and international celebrities. The money raised has been used for food donations and other means of helping hotel workers in need.
A second initiative was “A Time of Crisis: Stories from Hawa‘i’s Visitor Industry,” a video campaign in which hotel employees shared their personal stories on how the pandemic had affected their lives and those of their coworkers and families.

The COVID-19 Video Challenge was open to public high school seniors in which they were invited to submit a COVID-themed, 30-second video. The winning school—Waiakea High School—received a $10,000 cash prize and the students’ video was broadcast on KHON.

The latest was “Makaukau – We Are Ready,” prepared in time for the reopening of travel to the islands in October 2020. It was a response to the business community’s growing frustration with the pace of tourism’s reopening and the absence of firm government plans to respond to the economic crisis. It was led by HLTA, Chamber of Commerce Hawai‘i, and Hawai‘i Agricultural Foundation, with partners including Hawaiian Airlines, Central Pacific Bank, First Hawaiian Bank, American Savings Bank, the Hawai‘i Community Foundation, Hawaiian Electric Industries, the Hawai‘i Business Roundtable, and eight others. 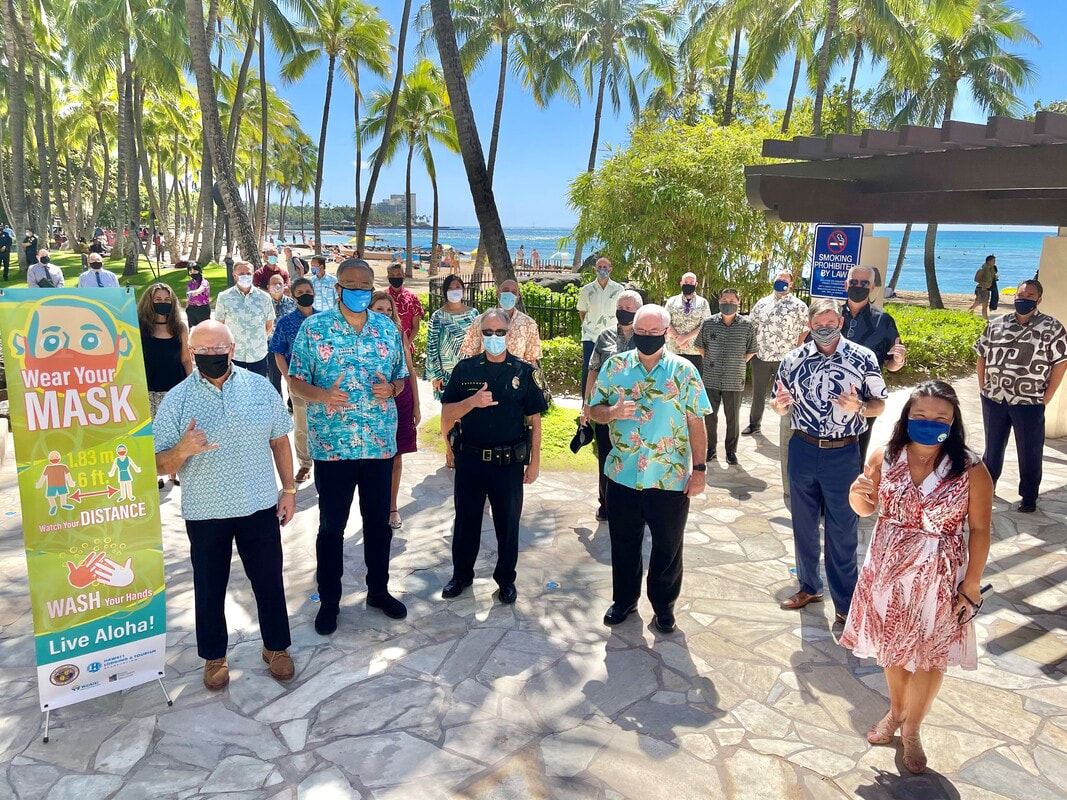 Food Drives. The association has led or participated in multiple food giveaways targeting hotel employees. Kau Kokua Kits, an effort of the HLTA and Y. Hata, were distributed twice in 2020, with the food made available at very low prices and distributed at Embassy Suites by Hilton Waikiki Beach Walk and Residence Inn by Marriott Oahu Kapolei.

The HLTA partnered with Hawai‘i Nautical to collect donations of linens, towels, toiletries, cleaning supplies, and furniture for the homeless. The Hawai‘i Nautical crew gathered the items from hotels and businesses across O‘ahu. The donations were distributed to the COVID-19 Temporary Quarantine Center that was established by the Department of Health, City and County of Honolulu, Institute for Human Services, HERE Local 5, and Hawai‘i Homeless Healthcare Hui.

In July, August, and October 2020 and April and May 2021, HLTA and Aloha Harvest collaborated to distribute food to the families of thousands of tourism industry employees, using funds raised by the Aloha Later campaign. Distribution sites have included ‘Aiea High School, the University of Hawai‘i’s West O‘ahu campus, Aloha Stadium, Ilima Intermediate School, and Waipi‘o Soccer Complex. More than 7,000 families have been beneficiaries.

​Two “Aloha Later” food distribution events were held in December on Kaua‘i, including one for employees of the Koloa Landing Resort which remained open during the pandemic.

In July 2021, HLTA partnered with Hawai‘i County Mayor Mitch Roth and KTA Super Stores to host a final “Aloha Later” food distribution at the Hilo Hawaiian Hotel. As an incentive for those who have been vaccinated or registered, more than 300 KTA gift cards were given away. ​ 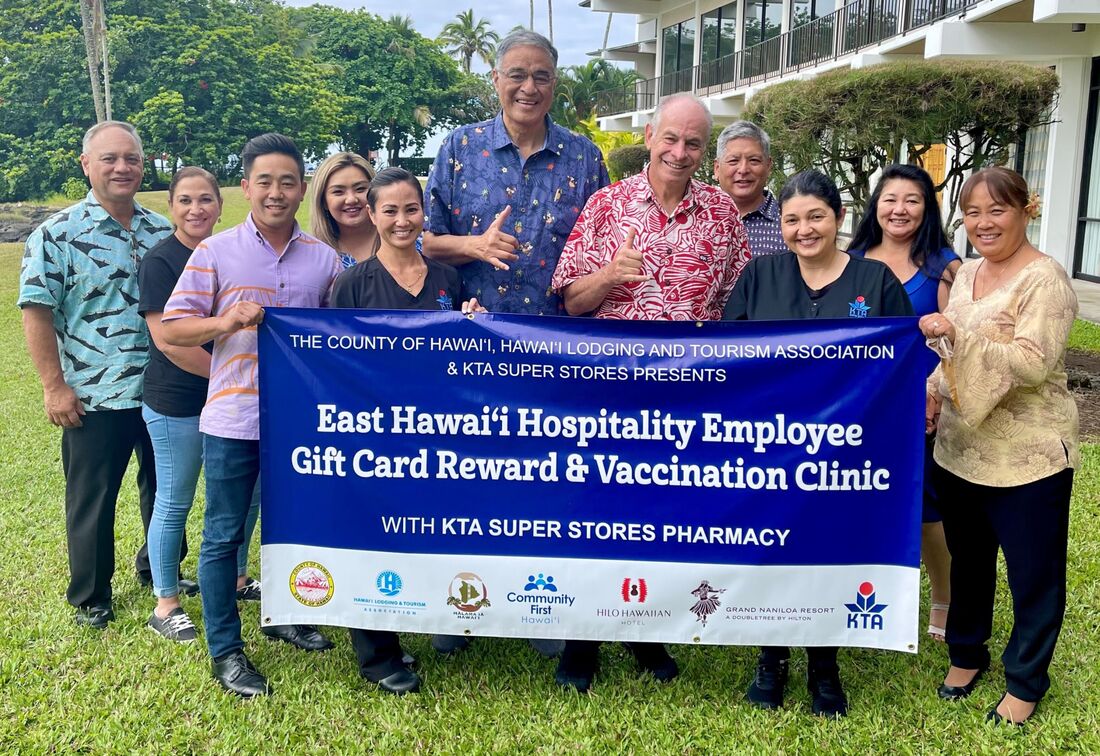 Advocacy
House Bill 862. A large coalition of 35 business and trade organizations, led by HLTA and the Chamber of Commerce Hawai‘i, was front-and-center in opposing House Bill 862, a measure that reduced the Hawai‘i Tourism Authority’s funding and shifted its source from the Transient Accommodations Tax to the general fund, strip the annual $103 million TAT allocation to the counties, and permit the counties to establish their own surcharge with a cap of an additional 3 percent (conceivably increasing the TAT by 30 percent-plus). The coalition succeeded in convincing the governor to veto the measure. After the veto, the Legislature met to override it. Again, the coalition lobbied vigorously to uphold the veto, and fell a single vote short in the Senate to sustain the governor’s action.

City Council Bill 80. The HLTA conveyed its firm opposition to a City Council proposal that would have imposed severe restrictions on hotel operations with regard to staffing levels, sanitation requirements, and other matters rightfully under the purview of hotel management. This government incursion into the operations of private businesses triggered a strong and vocal pushback from hotel general managers and the HLTA membership. The bill was changed to a resolution, which states the Council’s views, but does not have the force of law. A large group of general managers offered testimony in opposition to the proposal.

During the ensuing Legislative Session, we relied upon our relationships to similarly thwart backdoor attempts by special interest to introduce right to recall-type measures at the State level.

Meeting with Elected Officials. Throughout the pandemic, our coalition met with Governor Ige and his administration regularly on a variety of issues including: the efficacy of the Safe Travels program, the State’s vaccination emphasis, and the Governor’s August 23, 2021 request for nonessential travel to halt, and we made the specific recommendation that the State needed to re-open travel by November 1. Our regular appearances with Gov. Ige provided coalition members with ample opportunity to raise specific concerns being faced by their businesses and organizations.

HLTA also partnered with HTA and HVCB to convene regular meetings with the mayor of each county. These regular industry updates have been extremely beneficial to both hear from our elected officials and provide them with insights from the tourism industry.

Political Action. HLTA’s political action committee endorsed a lengthy slate of candidates for the 2020 election, which turned out to be a record-setting election with nearly 70 percent voter participation. Committee members evaluated and endorsed candidates who believe in the importance of the hospitality industry. While the pandemic prevented HLTA from holding candidate forums and mixers, as in the past, endorsements for federal, state, and county offices were announced.

In April, following a surge of crime in Waikiki, Visitor Public Safety Conference steering committee members including HLTA, HHVISA, WBIDA, and WIA convened again to meet with Prosecutor Alm and members of the City Prosecutor’s Office, Interim Police Chief Rade Vanic and other representatives from the Honolulu Police Department, as well as with Managing Director Michael Formby and other key officials from Mayor Blangiardi’s administration to craft initiatives and strategies to target the problem.

Career Expo. HLTA joined the Honolulu Star-Advertiser and Star-Events for their annual Career Expo at the Blaisdell Exhibition Hall in August 2021. Twenty-two HLTA members displayed booths alongside businesses, nonprofit organizations, and government entities. The businesses had the opportunity to meet with nearly 1,000 prospective employees as they looked to fill much needed positions.

Philanthropy
Charity Walk 2021. Despite being cancelled in 2020 and being relegated to a virtual format in 2021, the highly successful Visitor Industry Charity Walk made an impressive return this year with statewide efforts raising more than $2.053 million in monies that were distributed to more than 200 nonprofits organizations around the state. This was especially noteworthy considering that our most successful, in-person Charity Walk raised $2.67 million just two years ago. Bolstered by generous corporate donations and another strong performance from Maui, one could hardly tell that this year’s walk was held entirely online.

​Hotels for Healthcare Heroes. Modeled after the original Hotels for Heroes initiative, HLTA partnered with the Healthcare Association of Hawai‘i and President & CEO Hilton Raethel to provide two-night staycations to doctors, nurses, and other clinical staff—a program that was strongly supported by Lt. Gov. Green and the county mayors. Over the course of seven weekends in the fall of 2021, 715 heroes from 34 different hospital groups were provided 1,430 room nights at hotels around the state. These were made possible strictly through donations by HLTA member hotels. 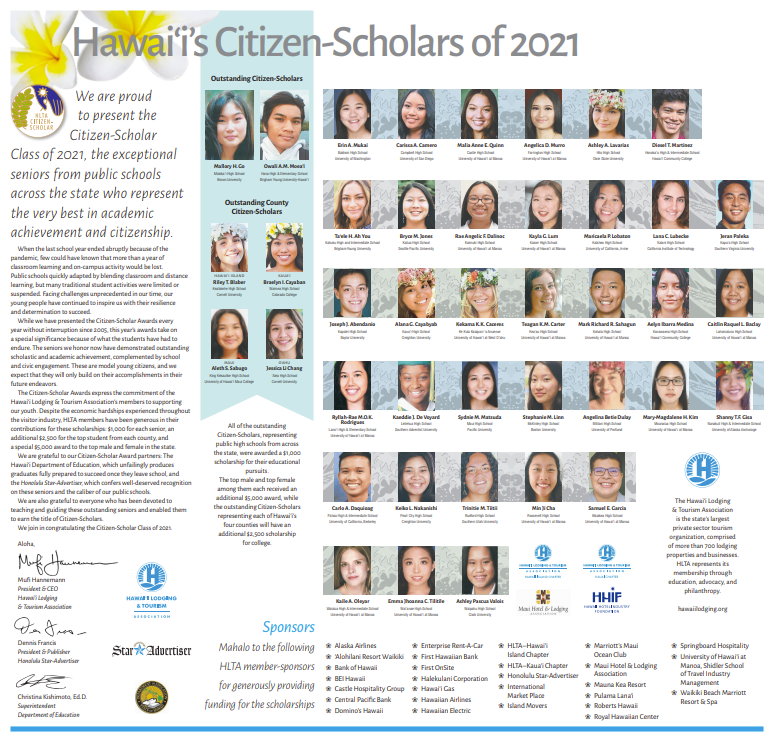 Honoring Citizen-Scholars. While the pandemic precluded HLTA from honoring the outstanding seniors in-person at the traditional luncheon, 41 of the top seniors representing public high schools statewide each received a $1,000 college scholarship, with the top student from each county earning an additional $2,500 and the top male and female student in the state receiving $5,000. The recipients were introduced through a Zoom event in May. Twenty-eight businesses or organizations donated money for the scholarships.

Honoring Educators. HLTA and ClimbHI awarded $1,000 scholarships for the first time to two outstanding public school educators to gain experience in and understanding of the hospitality industry. Fern White from Hawai‘i Island and Alyssa Alcos of Wai‘anae High School were selected for the grants.

Workforce Development. In another facet of tourism industry education, HLTA again joined with ClimbHI to help sponsor the ClimbHI Service Excellence Certificate which marries unique local philosophies with the renowned academic excellence of the School of Hotel Administration at the Cornell University SJ Johnson College of Business. Students who pursue this on-demand certificate participate in online training modules to develop fundamental skills for use in the hospitality industry.

Scholarship Golf Tournaments. HLTA succeeded in hosting three golf tournaments to raise money for its scholarship program and other needs during welcome breaks in the pandemic. The most recent, the 21st annual, was held at Pearl Country Club and raised more than $90,000 for the foundation to provide scholarships to students around our state.

Woman of the Year. HLTA's Women in Lodging & Tourism Committee honored 2021 Woman of the Year Julie Morikawa, the president and executive director of ClimbHI. Morikawa’s organization works to inspire students to finish high school and pursue higher education by exposing them to possible career paths and the processes necessary to achieve these goals.

I would be remiss not to mention how all of this was made possible by the efforts of many people. From the HLTA staff, to our amazing Board of Directors and our tireless committees and committee chairs, it is the efforts of all that made this year such a success. I am grateful for each of you and am eager to see what challenges and successes 2022 will bring.​